The water features at Quail West in Naples, FL consist of five features.  There is a linear fountain which greets residents as they enter the complex, a dramatic sequencing inside the gates, and three scupper walls. The linear fountain  includes nine 3/4” cascade nozzles, located along the center line of the fountain.  At night, each cascade nozzle is illuminated by a white LED freestanding light.  The sequencing fountain consists of  two rings of ten 1-1/4” bubbler nozzles and  thirty-three “Patriot”* smoothbore nozzles.  The Patriot nozzles are individually capable of quickly turning on and off. Also, all of the Patriot nozzles are capable of varying their spray height in unison by use of a variable frequency drive. The fountain has three different programs with approximately 200 steps (changes) per program before the program continuously repeats. At night, each bubbler nozzle and Patriot nozzle is illuminated by a “RGB” color-blending donut light. All of the lights are programmed to change colors simultaneously. The fountain pump vault contains a 10 HP display pump for the (33) Patriot nozzles, a 7-1/2 HP display pump for the (20) bubbler nozzles, and a 2 HP filter pump with two 50 GPM sand filters. The pump vault also includes a 1-1/2” fill manifold, two internal sump pumps, a vault light, a ventilation system, a wind compensation system, a lighting control panel, and a fountain control panel.  The scupper walls consist of wall scuppers (by others) that emit a stream of water  Located at the south end and in the central area are two clusters of cascade nozzles. At night, each scupper display is illuminated by a white LED hockey puck light and each cascade nozzle is illuminated by a white, freestanding LED light. A pump vault with  display pump, sand filter, an offline chemical feeder, a 1-1/2” fill manifold, a sump pump, a ventilation system, and a U.L. Listed fountain control panel powers the scupper walls.

*The “Patriot” nozzle has been replaced by the RRDJ Series of Nozzle/LED Assembly. 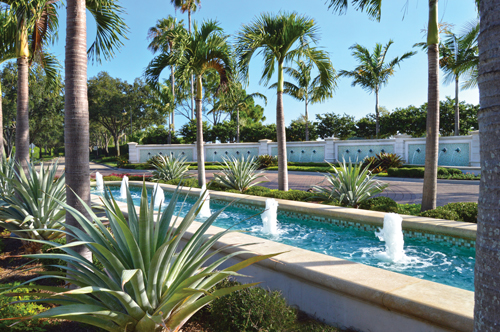